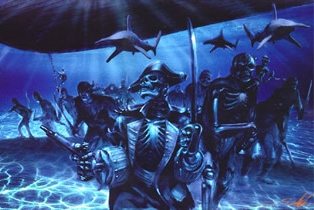 Nobody expects the skeletal pirate SEAL team.
"But one day, the master of the goblin blacksmiths, offered to build the king a golden mechanical army, seventy times seventy soldiers that would never know hunger and could not be stopped."
— Hellboy II: The Golden Army
Advertisement:

This is a type of monster that is immune to starvation and dehydration, it may not even have to sleep or breathe. Much like the Energizer Bunny, it just keeps going and going and going. Perpetual Motion Monsters are either explicitly supernatural (e.g. The Undead), a set of super advanced Mecha-Mooks, or both.

Science savvy characters may discuss how implausible it is that the walking dead in a Zombie Apocalypse, despite craving brains, can keep walking 24/7 for years or longer without any kind of sustenance. Compounded by that fact that though decayed they never actually rot enough to stop posing a threat. Frequently, The Professor / Mad Scientist will fear (or marvel) at the potential these thermodynamic law-breaking monsters represent. This is the whole idea behind undead armies in any setting— they are weak but fearless and while slow, they can march 24/7 with no supply lines, all while assimilating the enemies' fallen.

This is usually a Justified Trope for Ghosts, Dem Bones, and Elemental Embodiments since they aren't really biologically based, so they don't need traditional food sources. Although, they may need some other form of energy or material as a Power Source (like prayers or lighter fluid), thus averting this trope. For Mecha-Mooks and other technology based creatures they usually incorporate some near infinite Power Source (or a means to tap into an external one) and some kind of Healing Factor.

A character with the right type of Immortality who eats and drinks can still be a Perpetual Motion Monster. Their form of immortality specifically prevents them from dying due to starvation and dehydration, though they probably won't enjoy the experience... unless it's a case of them not actually needing to eat or drink, and thus they don't feel hunger or thirst in the first place. Such a character can make for a truly Implacable Man — nothing can keep them from their goal, not even the ravages of time!

For extra threat, the Perpetual Motion Monster is also usually unaffected by dismemberment (except for the "annoyance" of a lost limb, though a needle and thread can solve that). For extra extra threat, it's also a Super-Persistent Predator; since being a Perpetual Motion Monster means it doesn't actually need to eat except for the pleasure of it, it can afford to go to the ends of the Earth in pursuit of that one tasty hero-sized morsel.

Compare Automaton Horses (not the mechanical variety), where this is noted as one of the features that make fictional horses unusual. Compare Forgot to Feed the Monster when this is averted.

See also You Can't Kill What's Already Dead, where the undead just shrug off any injury for similar reasons as this trope.

Related to The Sleepless.

A Sub-Trope of The Needless.