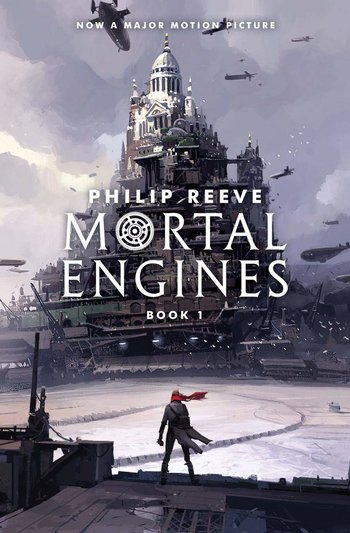 It was a dark, blustery afternoon in spring, and the city of London was chasing a small mining town across the dried-out bed of the old North Sea.
Advertisement:

The Mortal Engines Quartet is an award-winning, critically acclaimed series of novels by the English author Philip Reeve. It was initially marketed (somewhat ridiculously) as The Hungry City Chronicles in America. (This possibly happened because of the Stanisław Lem collection that was released as Mortal Engines in the US.) Four books were written in chronological order: Mortal Engines (2001), Predator's Gold (2003), Infernal Devices (2005), and A Darkling Plain (2006). A prequel series has come out set long before the first book, made up of Fever Crumb (2009), A Web of Air (2010) and Scrivener's Moon (2011). The short fiction collection Night Flights (2018) takes place relatively soon before the first book and features the secondary character Anna Fang, while a companion book, The Illustrated World of Mortal Engines, was published in the same year. More will come... eventually.

Mortal Engines takes place in a post-post-post-post-post-apocalyptic future. Nations no longer exist, except in the lands of the Anti-Traction League. Traction Cities — entire cities mounted on caterpillar tracks for mobility — are fiercely independent city-states, using giant jaws to devour one another for resources in a horribly unsustainable city-eat-city environment known as Municipal Darwinism: large cities eat small cities, small cities eat towns, towns eat suburbs, and everyone eats non-moving or "static" settlements. Trade is mostly accomplished by airship, though sometimes cities of roughly equal size (unable to devour each other) will stop to trade. Much of the Applied Phlebotinum involves Old-Tech, ancient remains of lost civilisations ranging from statues of Mickey Mouse ("animal-headed gods of lost America") to Lost Superweapons.

Traction Cities' military and ideological counterpart, the Anti-Traction League, is a vast Eastern coalition of static settlements, who aim to remove the abomination of Traction Cities from the world, though some of their methods may be no worse or better than the very Traction Cities they oppose.

Something worth mentioning, given the amount of back-and-forth editing in the page history, is that the most prominent Stalker is named Shrike in most editions and Grike in the North American ones. For Theme Naming reasons made clear in Fever Crumb — that is, all the Stalkers in his "batch" were named after birds — 'Shrike' (a small predatory bird) makes considerably more sense than 'Grike' (a feature of limestone pavements).

Peter Jackson and WETA Digital worked on a film adaptation of the first book, Mortal Engines, which was released in December 2018.