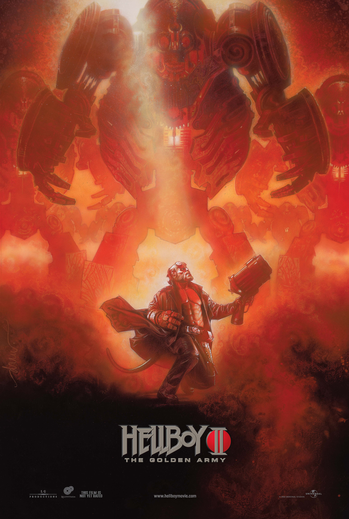 Hellboy: It's just a story, right Pops?
Bruttenholm: Is it now?
Hellboy: Yeah, c'mon! Those guys? They can't be real.
Bruttenholm: Well, my son, I'm sure you'll find out.
— Prologue
Advertisement:

It's been a few years since the last movie. Myers has been (literally) Reassigned to Antarctica. Hellboy and Liz are an Official Couple, but their relationship is going through a rough patch. Hellboy, chafing under the bureaucratic leadership of Tom Manning, decides to break the Masquerade and reveals himself to the public—but the public's reaction is far less pleasant than he expects. To rein Hellboy in, the B.P.R.D. upper brass sends Johann Krauss (a spirit medium who's been reduced to ectoplasm) to take leadership of the team.

Meanwhile, Abe meets a nice elf girl, Princess Nuala of Bethmoora, and they hit off quite well. Unfortunately, her twin brother Prince Nuada has declared war on humanity. He plans to reawaken the Golden Army—invincible automatons that nearly drove humanity to extinction the first time they were used—and he kills just about everyone who stands between him and the crown that would allow him to control the Army.

It falls to Hellboy and his pals to stop Nuada, but given the way humanity's been treating them lately and after hearing Nuada's side of the story, our heroes can't help but feel a little sympathy for the genocidal Jerkass. And as if this wasn't enough, Liz finds out she's pregnant, which... worries her.

A third film was reportedly in conceptual stage, but after a long period of Development Hell, the project turned into a full-on Continuity Reboot, simply titled Hellboy.

Example of:
Bazaar of the Bizarre