"At the Dawn of the Clans, destiny calls." 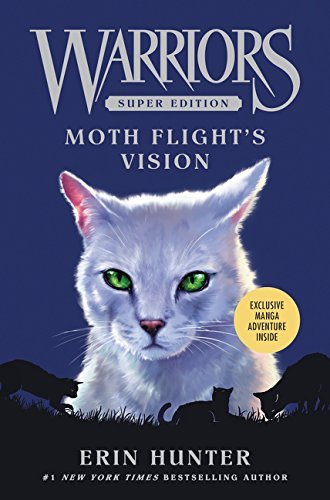 "Someday you will gather the scattered petals of the Blazing Star."

Moth Flight's Vision is a novel the Warrior Cats series. It is the eighth Super Edition, and serves as a follow up to the fifth series, Dawn of the Clans.

Set one moon after the defeat of Slash, the story centers on Moth Flight, the first medicine cat of the Clans. Haunted by strange dreams and visions, Moth Flight often has her head in the clouds, much to the displeasure of her mother, Wind Runner. After her easily distracted nature nearly causes the death of her father, Moth Flight gives up on trying to please her mother and leaves her Clan. However, on her journey, Moth Flight ends up discovering the Moonstone, a mythical rock which allows the living and the dead to communicate. Beneath the light of the moon, the spirits of her fallen kin visit Moth Flight, revealing that she has a greater destiny than any cat could have expected.

The novel was released on November 3, 2015. It was written by Kate Cary.