Beast of the Apocalypse 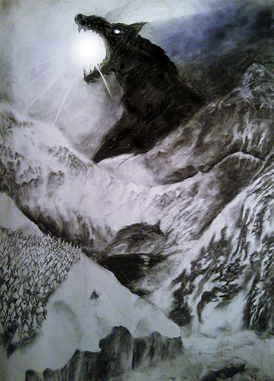 Thor's gonna need a ton of thunder-power to even touch this thing.
"And the beast which I saw was like unto a leopard, and his feet were as the feet of a bear, and his mouth as the mouth of a lion: and the dragon gave him his power, and his seat, and great authority."
— Revelation 13:2
Advertisement:

We're all familiar with the Antichrist—the Dark Messiah of the forces of evil, destined to lead the Legions of Hell at the end of the world. He's suave, he's clever, and represents the very worst that humanity has to offer.

This guy is a little different. Whereas the Antichrist is a monster in human form, the Beast of the Apocalypse is a literal monster, who also happens to be a harbinger of the end times. This is the kind of beast who gives the gods themselves nightmares, and in action it's liable to be a veritable engine of destruction, trampling over mortals, gods, and anything else that gets in his way. If this thing slips its leash you may as well turn out the lights and lock the universe behind you when you go, because there won't be much left. And even if the creature doesn't actually attack anyone, the simple fact of this creature's appearance means that things are about to get a whole lot worse. If the apocalypse prophesized was not the first time the Beast of the Apocalypse attacked and it ravaged the world earlier in its history, expect it to also be a case of Phlebotinum Killed the Dinosaurs.

For obvious reasons, such a creature is very likely to be a case of Sealed Evil in a Can. It is liable to overlap with Kill the God and Omnicidal Maniac, and will feature prominently in any Götterdämmerung. May be an Enemy to All Living Things.

Compare Destroyer Deity. See also Eldritch Abomination as well as its variants, Humanoid Abomination and Animalistic Abomination, which can all overlap with this.

Jormungandr the World Serpent is a godly entity who leads Team Valhalla in the VWE. Should Team Valhalla ever win, Jormungandr will retire from his post and the Earth will split in two, kickstarting Ragnarok.

Jormungandr the World Serpent is a godly entity who leads Team Valhalla in the VWE. Should Team Valhalla ever win, Jormungandr will retire from his post and the Earth will split in two, kickstarting Ragnarok.