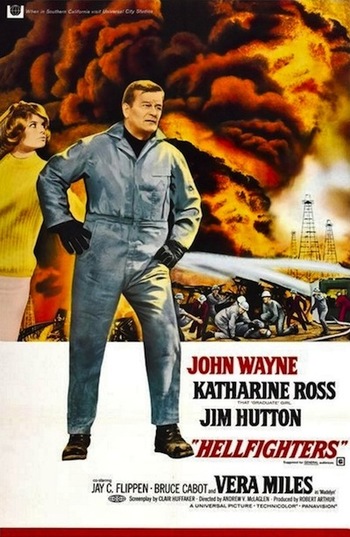 General: Gentlemen, I said I would say I was sorry [if rebel forces got through to shoot at them], but there is nothing I can say to make up for it. I feel like I want to cut my own throat.
Chance: A couple of hours ago I'd have handed you the knife.
Advertisement:

Hellfighters is a 1968 American film directed by Andrew V. McLaglen, telling the fictional story of an oil well fire fighting company and their prowess in putting out fires, loosely based on the exploits of Red Adair (who helped assist in the production of the film). John Wayne stars as Chance Buckman, the owner of the Houston-based Buckman Company, which puts out oil well fires anywhere in the world.

The movie opens with an accident at an oil well which causes it to explode into flames. Buckman's secretary Irene is busy rounding up everyone in the company. Chance is on the company plane with his friend Jack Lomax (Jay Flippen) on the way to the Bahamas for a celebration and gambling for New Years; George arrives by company helicopter, and Joe is called on the radiotelephone in his car. Greg Parker (Jim Hutton), Chance's second in command and known for being a lothario who invites women to the oil fires in order to bed them, has to be tracked down to the hotel room in Mexico city of his current paramour.

The team arrives at the fire in Louisiana, where a Houston television station is filming the attempt to put out the fire. When the reporter for the station attempts to interview Chance after the fire is put out, he causes an accident which injures Chance. Concern that he might not survive cause Joe and Greg to arrange to have Chance's daughter, Tish (Katharine Ross), flown in to see him.

Chance recovers, but is so stubborn the doctors have to keep him under sedation for a week to keep him from leaving the hospital too soon. Meanwhile Greg takes the call when another fire breaks out, and Tish wants to come along since she won't be able to see her father for a week. The entire company, including Greg, realizing Chance wouldn't like it if Tish went (based on Greg's extracurricular activities with women he invites to view fires) tells her not to come (without telling her why). She feigns an excuse of seeing a friend of hers only a hundred miles from the Fire. Tish then uses this excuse to rent a car and drive to the fire.

When Chance is fully recovered, Tish goes to see Chance in the hospital and admits that she went to see a fire with Greg. Chance calls Greg into the room and cold-cocks him, sputtering about Greg inviting women to a fire and what he does, while handicapped in trying not to tell Tish why he's upset. Greg, slumped on the floor, then informs chance that he and Tish got married the night before, and, as Tish admits, if they hadn't seen "this lovely Cajun church, we might have waited."

Chance and Greg have to meet Madeline (Vera Miles), Tish's mother and Chance's estranged ex-wife, who divorced Chance when Tish was about five, because she saw Jack Lomax break his back in a fire and end up in a wheelchair for the rest of his life, and she couldn't live with the possibility of the same thing happening to Chance. Chance and Madeline come to the realization that Tish isn't Madeline, she has a lot of her father's qualities too, including being able to stand the idea of the danger Greg is involved in. Plus, Greg and Tish are adults, there's nothing they can do about it.

After another serious fire where Greg is almost killed, Chance decides to fold his company and take a job on the Board of Directors of the Lomax Oil Company, and there's a position there for Greg, too. Greg can't stand the idea of working in an office, and after inviting Tish into the meeting, they offer to buy the company from Chance. Chance says they can have it as a wedding present. Chance goes on to be a director at Lomax Oil, where they discuss such important issues as what color to paint the restrooms in the company's 1,400 gas stations.

Madeline comes back to Chance now that he is no longer fighting fires. They decide to remarry, when a terrible fire in Venezuela that Greg is fighting explodes into a huge multi-well disaster, which may be beyond Greg's capacity to fight. Madeline admits that she understands that Chance has to go to the fire, but admits this will be the deciding point: according to Tish, this is the worst possible fire he would ever have to fight: 5 simultaneously burning oil wells, and that there never will be a worse one. Either she'll be able to stand it, or she'll break up with him again.

The final fire in the movie involves Chance and Greg attempting to put out a huge fire while simultaneously battling Venezuelan Army incompetence and rebel fighters.

The movie is also one of a very tiny number of films of the 1960s where a major character is handicapped, specifically wheelchair-bound. Jay Flippen, who plays Jack Lomax, was actually handicapped in real life.