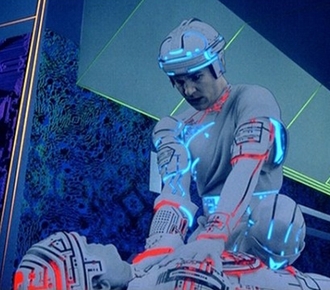 Well, at least no one can accuse Flynn of turning yellow!
Advertisement:

Video games, movies, and other media action can be fast paced and potentially confusing. Telling apart The Cavalry from the Elite Mooks they're engaging is complicated by the camera moving and lack of good lighting; this is why factions are Dress-Coded for Your Convenience and members of Super Team are Color-Coded Characters. If there's energy attacks, so are they. Ray Guns will have the color of the faction, and even normal guns' tracer rounds will be the same color.

Which works fine until the hero or a villain picks up the opponent's costume, weapons, or vehicles. Going a step further, what about characters who switch sides like the henchmen pulling a Mook–Face Turn? What ends up happening is a Convenient Color Change. The clothing, weapon, vehicle, character, building, or even city will change their default color to the one they're now aligned with. In the case of an infiltrator, the "how" for this color change is usually glossed over, but if a reason is given, it's that the colored areas are kind of like a high tech/magical mood ring.

There's a lot of variations on this. Mecha-Mooks that get hacked will spontaneously change the color of any lights on their chassis, as if they were built with multiple colored bulbs just in case they were ever hackednote (or the owner wants to mod them). Characters under Mind Control or the effects of The Virus may have this happen to them as well.

This tends to be a staple of strategy games if different players have the same units and structures at their disposal, because you do need a way to tell your forces apart from your opponents', hence the use of Color-Coded Armies and Color-Coded Multiplayer. In this and other settings, a unit/character that can change color without changing alliances serves as an infiltrator.

Paint It Black is a subtrope of this. See also Eye Colour Change.