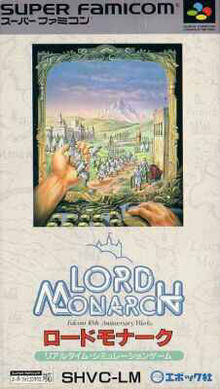 Lord Monarch (ロードモナーク) is a real-time strategy war game by Falcom. The game is considered to be the seventh installment in the Dragon Slayer series. It was originally released in 1991 for the NEC PC-9801, then later ported in 1992 to the Super Famicom and in 1994 to the Sega Mega Drive.

Gameplay involves ordering soldiers around and controlling the kindgom's tax rate to expand territories and manage currency before sending out the king to defeat the opposing armies.

During 1997, Lord Monarch was remade for Windows as Lord Monarch Online and released for free in both Japanese, and for the first time, English. Lord Monarch is one of the 42 titles included in the Japanese version of the Mega Drive Mini.