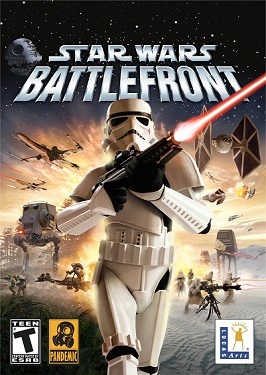 For years you've watched the greatest Star Wars battles.
What if...
You could actually live them?
—Trailer tagline

for the first game.
Advertisement:

A series of Video Games set in the Star Wars universe, developed by Pandemic Studios. The series was heavily inspired by DICE's Battlefield series.

The main gamemode, called "Conquest", there are two armies trying to gain control of Command Posts across the battlefield. If a player dies, they can respawn at any command post that their team controls. The battles are often huge, sometimes bigger than the movie scenes they are inspired by, involving dozens of players and even more NPCs. In addition, players can hop into various Star Wars vehicles ranging from tiny hover-bikes to aircraft to Humongous Mecha. It included two story campaigns (Prequel Era & Original Era) which were mostly recreations of the movies's big battles alongside some original battles set in planets from the Expanded Universe.

A sequel, simply titled Star Wars Battlefront II (now renamed to Battlefront 2 Classic), introduced the ability to play as Jedi, Sith, and various other Hero units from the movies such as Han Solo and Boba Fett. It also introduced space battles, where players have to defend their team's capital ships from sabotage and shoot down enemy fighters. The game also includes a single-player campaign featuring the 501st Legion, a unit of clone troopers/stormtroopers (named after a fan organization that specializes in Stormtrooper armor and other uniforms) that served the Republic and Empire from the Battle of Geonosis to the Battle of Hoth and as Darth Vader's personal legion from the time Order 66 was issued onward.

In spite of the games' status as the best-selling Star Wars games up until Star Wars: The Force Unleashed was made, a true successor was never made by LucasArts and Pandemic. Instead, several spin-offs that comprise the Assault sub-series were created for portable devices. The first title, Star Wars Battlefront Renegade Squadron, introduced customizable soldiers and dealt with a black ops team led during the first stages of the game by Han Solo that conducted in behind-the-scenes means to allow the Rebel Alliance to win against the Empire up until the Battle Of Endor. Mobile Squadron was also made, existing as an excuse to release a Star Wars game on the mobile phone. Battlefront III eventually had leaked footage and was in the early stages of development, but with the collapse of Free Radical Designs (the company producing the game), Battlefront III was left unfinished without a developer. Content that was planned to be featured in Battlefront III was eventually restructured into Star Wars Battlefront: Elite Squadron, which would feature the ability to go from land battles to space battles in the same mission. It would also tell the story of a force-sensitive clone trooper named X2 and his trials as a Jedi and a member of the Rebel Alliance.

There was a game that LucasArts was planning to release to serve as a preview for what the next installment would be capable of called Star Wars: First Assault, although the game would play differently from previous titles in the series. This was subsequently cancelled when Disney bought the company and stopped LucasArts from producing content not related to the new films, giving the licence to EA. Electronic Arts would then go on to reboot the franchise in time for The Force Awakens.

For tropes on the 2015 game which has the same name, go here.

open/close all folders
Tropes common to the series:
Tropes specific to the first game:
"A trope page is under hostile control!"