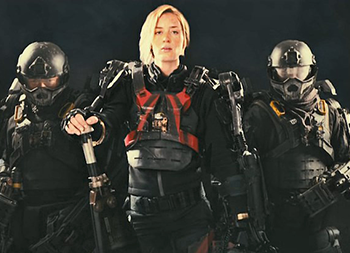 "Where ya gonna find another girl who can shoot the eye out of a Bug at two hundred meters?"
— Dizzy Flores, Roughnecks: Starship Troopers Chronicles
Advertisement:

The Squad will often include a female to widen the demographic appeal (to women and, er, young men).

Fills the role that was used primarily for minority characters in earlier times. A lone black or Japanese soldier fighting in an otherwise all-white, American World War II unit was its most common form, despite being totally unrealistic since the US Armed forces did not integrate their combat units until 1948, 3 years after the end of the war.

A particularly strange trope in countries where women are specifically barred from serving on the front line. However, sometimes this may be explained as being a test for determining whether or not to lift this barring. Other times, circumstances may force female troops not serving in combat positions to take this role because modern war contains no real front lines. Or it could be a science fiction or fantasy setting where such restrictions are a thing of the past (or they never existed in the first place).

If the Squadette is particularly skilled, she's also an Action Girl. There's rarely more than one due to The Smurfette Principle; if The Squad is all Squadettes, you get the Amazon Brigade. If The Squadette has to disguise herself as a man, she's Sweet Polly Oliver. A Squadette isn't unusual or token in a society where Gender Is No Object.

The secondary character version generally falls into two categories: the Ms. Fanservice who typically leaps and bounces around in implausibly revealing or form-fitting gear, or the tough, grubby tomboy who is usually more convincing as a warrior but also less likely to survive the story.

Boyish Short Hair is common but not obligatory. May also be a Ladette, but this is not a mandatory trait. On the other hand, if she remains feminine and elegant while being a competent fighter, she may be a Lady of War.