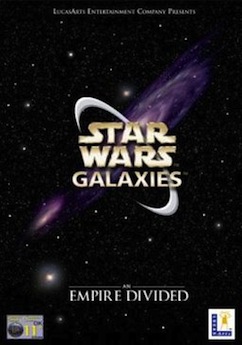 Star Wars Galaxies was a Star Wars Legends MMORPG developed by Sony Online Entertainment (makers of the EverQuest series) and LucasArts. It launched June 26th, 2003 and ran until its shutdown on Dec. 15th, 2011. Notable for having a wide variety of professions and locales and being the first Star Wars MMO (but not the last). It was also somewhat infamous for a series of controversial changes in 2005 (New Game Enhancements) that greatly altered a lot of the game's fundamental mechanics with little warning to the people already playing it.

Set shortly after the destruction of the first Death Star, Galaxies allowed people to join the Rebel Alliance or the Empire to fight in the escalating galactic civil war. Or not, since after finishing the tutorial segment you were pretty much free to do whatever the hell you felt like. This included, but was not limited to, exploring ten (later twelve with the expansions) worlds from the Star Wars Universe, piloting and customizing your own starships, building a business, running your own city, entertaining other players with elaborate dances or songs, tricking out a bachelor pad, milking Banthas, or just hanging around with other Star Wars fans.

Three expansions were released through out the game's run: Jump to Lightspeed (later made free to all subscribers), Rage of the Wookiees, and the Trials of Obi-Wan. An online trading card game was also created in 2008 and was free to play for all subscribers, with booster packs sold separately.

that's free to play for anyone who owns a disc copy of the original game. Be warned, they're still in the testing phases, which means it's not entirely working yet and server wipes are common at the moment. Also there's a fan-run post-New Game Enhancements emulator project called SWG Legends that's currently live on the Omega server.