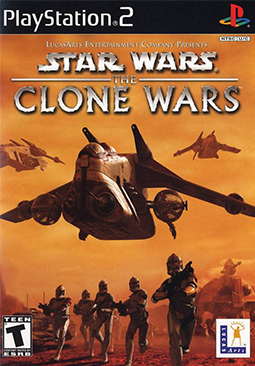 Star Wars: The Clone Wars is a 2002 video game, made by Pandemic Studios for Lucasarts, set in the Star Wars Legends continuity, and released for the PS2, Gamecube and Xbox.

The game is mostly vehicle-based, a mix of both ground-based combat (with craft like tanks, STAPs, and the occasional AAT) as well as air-based combat in the Republic Gunship.

The game starts off directly before and during the climatic battle of Attack of the Clones, putting you in control of Jedi Master Mace Windu. The rest of the game puts you in control of Anakin Skywalker, who, along with Obi-Wan and the rest of the Jedi, uncover a plot by the Seperatists to salvage and exploit the power of the Dark Reaper, an ancient superweapon capable of draining the Force from everything around it.