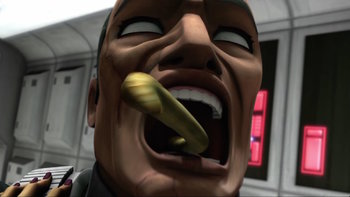 Star Wars meets Invasion of the Body Snatchers.
As Senator Padmé Amidala once told C-3PO, it's a big universe out there. That means there's also some horrors waiting that could stick into the minds of even the most fearless Jedi, whether it be the horrors of war, surprisingly brutal deaths, creepy locales, frightening species, or psychopathic individuals from a galaxy far, far away.
Advertisement:
open/close all folders
Season One
"Rising Malevolence"

"Duel of the Droids"

"Children of the Force"

"Point of No Return"

"The Jedi Who Knew Too Much"

"The Rise of Clovis"