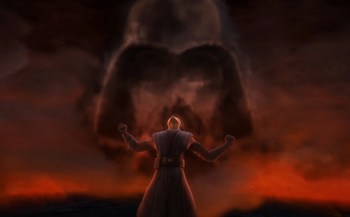 He who seeks to control fate shall never find peace.
Advertisement:

The Jedi remain stranded on Mortis, and the Son, aligned with the dark side of the Force, renews his efforts to convert Anakin as the Jedi prepare for a decisive confrontation. Anakin is stunned by images of his dark future as Darth Vader. The Son promises him the power to avert this destiny. The Father recognizes that the Son has broken the rules of time. He wipes Anakin's memory of these future visions and steals the Mortis Dagger to end the conflict. The Father impales himself, thus taking the Son's power. The Son, stunned by this, is run through by Anakin. With all three Force wielders dead, the imbalance in the Force disappears on Mortis. The three Jedi are returned back to the galaxy proper, apparently at the moment that they disappeared.