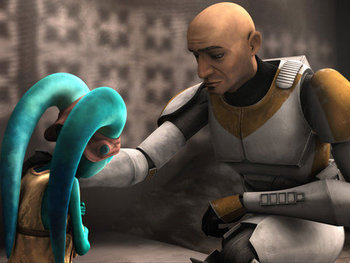 open/close all folders
Season One
"Ambush"

"Slaves of the Republic"

Hondo: (sounding genuinely encouraging, while still being his Large Ham self) This is worth the price of a ship. To see the construction of a Jedi lightsaber, this is priceless. Finish it! And together, we can defeat Grievous...

"A Sunny Day in the Void"

"Point of No Return"

"The Jedi Who Knew Too Much"

"The Rise of Clovis"

"On the Wings of Keeradaks"

"Gone with a Trace"