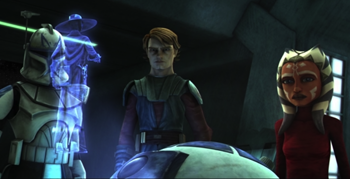 Overconfidence is the most dangerous form of carelessness.
Advertisement:

Anakin, Ahsoka, and their clone troopers are sent in pursuit of Cad Bane after he broke into the Jedi Temple and stole a holocron. Bane's next target is Jedi Master Bolla Ropal, the keeper of a crystal containing the names and locations of every Force-sensitive child known to the Jedi Order. But they arrive just a bit too late: the battle droids placed under Bane's command have already captured Master Ropal and the crystal.

Bane tries to get Ropal to open the holocron so it can read the crystal, but he dies under torture rather than submit. When he finds out that other Republic forces have arrived in the system, Bane hatches a backup plan.

Anakin, Ahsoka, Rex, and the clone troopers board Bane's ship. During the fighting, Bane manages to capture Ahsoka and stick her in an airlock. He threatens to space her if Anakin doesn't open the holocron. Anakin complies, and Bane manages to escape while Anakin is saving Ahsoka from the airlock. Bane arrives at the hangar and begins to plan his escape before he is accosted by two clone troopers who order him to surrender.

When Anakin and Ahsoka arrive at the hangar, while running for the shuttle, they witness Bane being shot and falling over the railing of the upper level by one of the clone troopers, Denal, who eventually boards the shuttle last and says that he wasn't able to get the holocron — but his voice doesn't sound quite right. As the ship begins to blow up due to a fire in the artillery magazine setting off the proton bombs, the Republic forces return to their own cruiser.