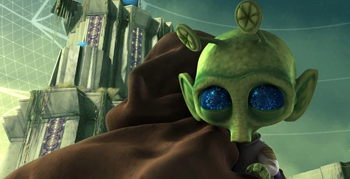 The first step to correcting a mistake is patience.

As Anakin and Ahsoka's strike team returns to the Resolute empty-handed, one clone trooper notices something suspicious and points it out to Rex, who promptly calls Anakin over: drops of green blood on the floor of the shuttle, a colour that humans and Togruta don't bleed. Ahsoka, meanwhile, grows concerned about Denal, who's acting odd... for a reason: it's Cad Bane in disguise, but as Anakin leaps to stop him, the bounty hunter is able to steal a starfighter and hyperspace ring and escape. Trying to find the bounty hunter and his stolen data, several Jedi meditate through the Force to see what he's going to do next. As it turns out, Sidious has hired Bane to kidnap four children from the list to be brought to his facility on Mustafar for a vile purpose. Although the Nautolan child Mace Windu saw on Glee Anselm has already been kidnapped, Anakin and Ahsoka rush to Naboo, where he saw a Gungan child in danger, and Obi-Wan rushes to Rodia. However, the Jedi Master is just slightly too late to prevent Bane from escaping the jungle planet with another baby. Anakin and Ahsoka's ambush of Bane on Naboo goes flawlessly as they capture the bounty hunter. However, the two kidnapped children are still unaccounted for, and it's a race against time for the Jedi to rescue them and retrieve the stolen holocron and data crystal, especially since they don't know who the mastermind is...