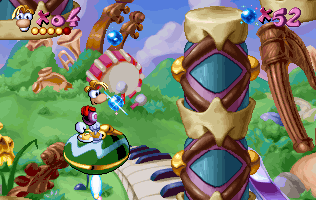 That thing he's riding on? It's a maraca.
Quite a few video games have levels or other areas that are music-themed. No, we're not talking about an Unexpected Gameplay Change to a Rhythm Game here. (There might be a music-themed Mini-Game or three, but that's not the whole point of the place.)
Advertisement:

These levels make you "face the music" in a more literal fashion. They're made of musical instruments, sheet music, or (somehow) music itself, often of giant scale. You might get blasted out of a huge trumpet, walk gingerly along a giant keyboard, or slide down a musical score. Often, moving around and interacting with your surroundings will "play" at least a few of the instruments. If the level designer is feeling especially playful, the background music itself may even be affected by what you do in the level. As these settings tend to be light and comical, they're sometimes used to indicate a Breather Level. But don't count on it.

The Electrodrome is a funky fresh music-filled nightclub.

The Electrodrome is a funky fresh music-filled nightclub.