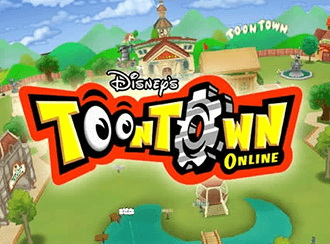 "Are you Toon enough?"
Advertisement:

Disney's Toontown Online is pretty much what it says in the title: a town full of toons, online! It's an MMORPG featuring falling flower pots, cream pies, and corruption of humanity.

You play as a colorful cartoon animal of your choice, living in an equally cartoony world. In Toontown, there's plenty of fun to be had, with Trolley Games, go-kart racing, mini-golf and all sorts of other activities in store. However, the town has become infested with Cogs, robotic businessmen who wish to transform the whole city into a dull, gray corporation. To keep Toontown vibrant and fun, the Cogs must be fought back with a variety of practical jokes, such as the aforementioned pots and pies.

Unlike most MMORPGs, this one has a basic turn-based system and can literally make people laugh their heads off. No, seriously, when a Cog loses a battle, its head explodes!

Not to be confused with that place where cartoon characters live.

Toontown Online closed on September 19, 2013. However, fans remain loyal to the game and it remains open through various private servers that retain the game's core gameplay features with the promise of new content.

If a toon loses all their laff, the health in Toontown, they end up going sad and retreating to the playground, with losing horns to add insult to injury... or sadness.

If a toon loses all their laff, the health in Toontown, they end up going sad and retreating to the playground, with losing horns to add insult to injury... or sadness.