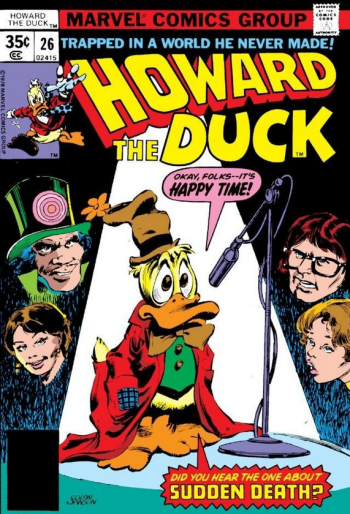 Not unlike chickens, "duck" is often seen as an inherently funny word, and this is frequently applied to duck characters themselves. When not depicted as selfish and temperamental (or clumsy and dim), ducks are commonly shown as hilarious characters, sometimes because of the aforementioned negative qualities. It's also not uncommon for ducks to have some form of speech impediment a la Donald or Daffy. Ducks are often very loud, whether anthro or not.

Ducks can also garner humor through playing on the alternate meaning of Duck! (take cover!), or occasionally through serving as a Last-Second Word Swap for a certain obscenity.

Compare to the aforementioned Clucking Funny, when it's chickens who are the jokesters, and Swans A-Swimming, for a more elegant and graceful waterfowl. Contrast Foul Waterfowl, for aggressive and dickish aquatic birds.