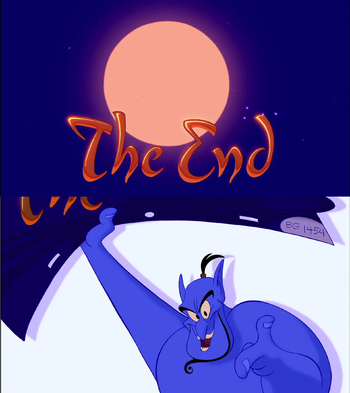 "You have been a fantastic audience!"
"You're still here? It's over! Go home! Go!"
—Ferris Bueller at the end of Ferris Bueller's Day Off
Advertisement:

In a nutshell, this is telling the audience the show is truly over. They can either wait for the next attraction or go home (especially if that was the final one).

Often presented as The Stinger, but other times it's a stock message. In children's shows, it's often delivered in song. If they do it often enough, it's an Every Episode Ending or Couch Gag. In modern times, Vanity Plates can serve the purpose.

Named for the line at the end of Looney Tunes shorts that, between 1937 and 1946, was given to Porky Pig to say. (Which is why most usage of this particular line is rendered "Th-th-that's all, folks!")

Remember that examples are not merely quoting the trope namer.

Perhaps the most famous use of the signoff in all ''Looney Tunes'' history.

Perhaps the most famous use of the signoff in all ''Looney Tunes'' history.