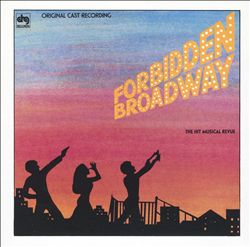 Original cast. Unoriginal cover.
So come with us on an omnibus
To a theatre-goers' soiree
To that Neverland where the hits get panned
Forbidden Broadway!
—Volume 1 Opening Theme
Advertisement:

Forbidden Broadway is a parody revue show written and directed by Gerard Alessandrini that originally ran off-Broadway from 1982 to 2009. The early incarnations of the show spoofed musicals from the Golden Age and iconic performers like Ethel Merman and Carol Channing, but the format was quickly adapted to pastiche works in the current Broadway season. As the revue gained reputation, it became a point of honor in the theatre community to have one's work parodied by Forbidden Broadway; as New York Times chief theatre critic Ben Brantley wrote in his review of the 2000 edition: "such a detailed evisceration happens to be the highest compliment you can give a musical star. It means that there is something there to parody."

Forbidden Broadway is typically performed by a cast of two men and two women with piano accompaniment. The show went on hiatus in 2009, but returned to turning out new editions off-Broadway in the summer of 2012. It's also toured the U.S., has yielded two spinoffs, and even made a few trips overseas (some of which with a full symphony orchestra). A spinoff of sorts entitled Spamilton, a parody of Hamilton, opened in 2016. note Please be warned that if you look up "Spamilton" on YouTube, the first results will be videos from the highly-popular fan channel Spamilton, which has a similar mission statement of lovingly parodying Hamilton (in the case of the YouTube channel, it's via a pair of young Canadian women pantomiming to Hamilton songs while wearing giant cardboard cutouts of Lin Manuel Miranda's face), but it and the revue show are otherwise unrelated. Scroll down the results if you wish to find the revue songs.