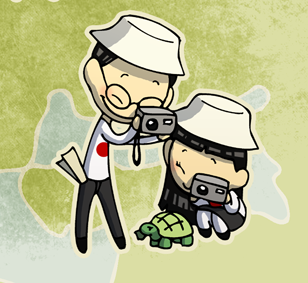 "The Japanese go abroad in a package; they have their own crocodiles, and their own flags and their own must-see stops. This is the way the vast majority travel, and they are not touched."
— Donald Ritchie, quoted in Dogs and Demons: Tales from the Dark Side of Japan by Alex Kerr
Advertisement:

Before the bubble burst on the Japanese economy, waves and waves of tourists were coming overseas. In any Chase Scene or crowd scene, expect there to be such a group of tourists, who just ooh and ahh at the main action and take pictures while flashing the V-Sign at one another. This has not quite passed into Dead Horse Trope territory, as plenty of Japanese still do travel overseas in Real Life, and tend to do so in large tour groups due to low levels of foreign-language proficiency and a lack of Japanese speakers and signage in other countries. Such groups are very likely to contain keen and very well-equipped photographers. However, it shows up quite a bit less now than The '80s and The '90s.

The trope usually pokes fun at their tendency to snap photos, travel in huge groups, and always behave like they're visiting a zoo.

Since the turn of the 21st century, the stereotypical Asian tourist is increasingly likely to be Chinese and Korean rather than Japanese.

A subtrope of Funny Foreigner. If they get a chance to talk, may often use Asian Speekee Engrish. Compare with Hawaiian-Shirted Tourist and "Ugly American" Stereotype, this trope's two Eagleland equivalents.

In the middle of Day 3, Willy meets a family of Japanese tourists who want to take a picture and give him ninja weaponry in return.

In the middle of Day 3, Willy meets a family of Japanese tourists who want to take a picture and give him ninja weaponry in return.