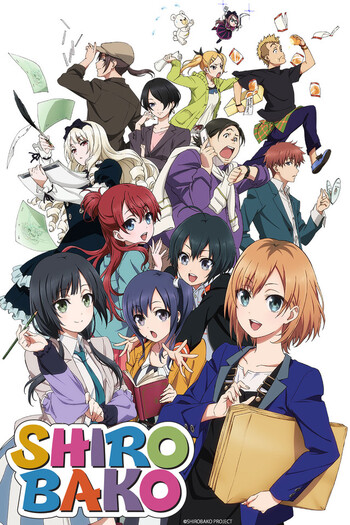 Five high school friends — Aoi Miyamori, Ema Yasuhara, Shizuka Sakaki, Misa Todou and Midori Imai — vow to produce an animated series together. As the Animation Club of Kaminomiya High School, they worked together to create an animated short for the school festival. Soon enough the former three graduate, but all five vow to one day meet again and see their dream of creating an anime professionally fulfilled.

Fast forward to two-and-a-half years later: Aoi and Ema are now working as production assistant and key animator, respectively, at struggling Musashino Animation. Shizuka is a newbie voice actress, but still hasn't landed an anime role. Misa feels trapped in her well-paying but monotonous routine at a 3D graphics studio. Midori plans to be a writer, but is still in college. Day in and day out, they're exposed to the harsh realities of the industry they so loved, like long hours, production delays, and production staff at loggerheads with each other, never mind how this leaves little time for them to do what they want. Is it still possible for them to reach their high school goal of doing a series together?

A 24-episode (though it's been planned for 50 episodes originally

, so it might get a second season later) Anime First production from P. A. Works directed by Tsutomu Mizushima (known for his work on Squid Girl and Girls und Panzer), Shirobako (literally White Box, after the white box that finalized production videocassetes were packaged in) takes a look at the workings of the Japanese animation industry, particularly on the studio side of things. It aired during the Fall 2014 Anime season.

Two OVAs were released for the series, both connected to the shows that the Musani staff animated, both bundled in as specials for the Blu-Ray release. The first OVA tackled an early episode of Exodus, a Musani-original series, while the final Blu-Ray included the first episode of Third Aerial Girls' Squad, the manga adaptation the studio worked on during the series' second half. A movie was released on February 29, 2020.

In a hilarious bit of Defictionalization, Takeshi Nogami released a complete volume of Third Aerial Girls' Squad for the 2015 Summer Comiket, published as it would have appeared entirely in-universe, complete with an advertisement of mousepad for Sailor Suits and F3s.

Examples of the following tropes have been rejected by the author. Funny story...: