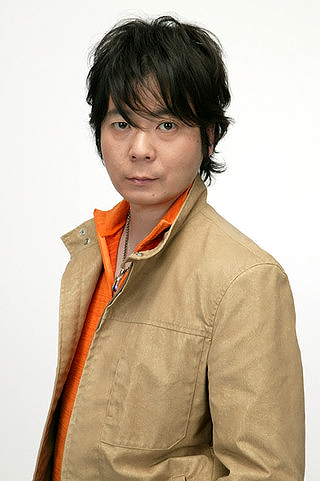 Mitsuaki Madono (b. July 28, 1964) is a veteran voice actor from Osaka, Japan.
Advertisement:

Providing an easygoing, casual, chilled, and suavely voice to the world of voice acting, Madono is a non-pigeonholed semi-bit player who broke into the industry from his bit performance throughout YuYu Hakusho.

His status mostly remained as a semi-bit player through The '90s, until he landed the role of Pizza / Soldat J of The King of Braves GaoGaiGar to which thoroughly took his name a step upward towards supporting roles of major statuses.

Once his name stabilized, Madono often gets Lethal Joke Characters or Butt Monkeys like Haruki Emishi in Get Backers, Loki in Valkyrie Profile, Joker in Flame of Recca, and his most renown role, Kon of Bleach.

For the more serious side, he is recognized for his role as Kaname Ohgi of Code Geass.

Lalalala~ Mind if I bang you up a bit? If you die because of that... it's a necessary sacrifice. You understand?