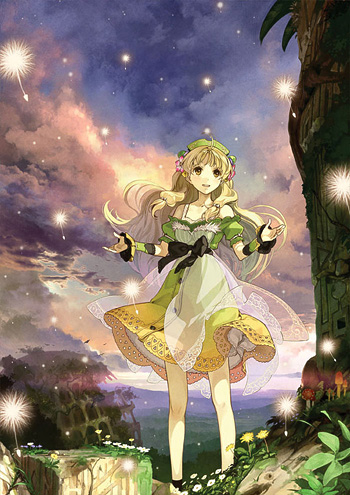 Atelier Ayesha: The Alchemist of Dusk is the first entry in the Dusk Trilogy of Atelier games on the PlayStation 3, released in June 2012 in Japan and American/European territories in March 2013. An Updated Re-release, Atelier Ayesha Plus for PlayStation Vita, adds new costumes, Bonus Bosses, and other features. Atelier Ayesha DX, a second rerelease, has been announced for PlayStation 4, Nintendo Switch, and Steam. Though it shares many similarities with the Arland Trilogy, Atelier Ayesha starts a brand new storyline with a new set of characters. Like most Atelier games, it can be described as one-part JRPG, one-part Time Management Game and three-parts Item Crafting with a dollop of Moe for flavour.

The world has entered a period known as the Age of Dusk, named for the slow decline of the earth's vitality. On the edge of this world lives a young apothecary called Ayesha Altugle, who lives a lonely life selling herbal medicine with only her pet cow for company.

One day, when Ayesha goes to visit the grave of her missing sister Nio, she suddenly encounters a ghostly vision of her departed sibling. A passing alchemist seems to hold the answers to the phenomenon, but tells Ayesha to Figure It Out Herself. With only a single clue (a mysterious glowing flower) and an ominous time limit of two years, Ayesha must learn all there is to know about alchemy to figure out the secret behind her sister's vanishing, and possibly a way to save her too.

Tropes that appear in Atelier Ayesha: The Alchemist of Dusk: