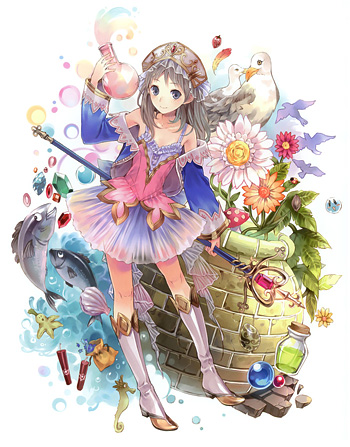 This nation has a job called "adventurers." It all happened before Arland became a republic. People wanted to explore, adventure, or develop the frontier. The knights of Arland were weak, so the citizens joined them and helped out. It happened gradually, but that system was later institutionalized. Adventuring is now a real job. My mother was one of those adventurers. I hear she's actually famous, too, but we haven't heard from her in years. My father and sister both think she's already... but I don't think so.
—From the Story in the game's manual
Advertisement:

Atelier Totori is the second Atelier game in the Arland series, preceded by Atelier Rorona: The Alchemist of Arland and succeeded by Atelier Meruru: The Apprentice of Arland. It was released in 2010 and in late 2011 in the West. Like many Atelier games, it can be described as one-part JRPG, one-part Time Management Game and three-parts Item Crafting with a dollop of Moe for flavour.

Atelier Totori tells the story of Totooria Helmold (just call her "Totori"), a young adventurer travelling across Arland on a grand quest to discover what happened to her Missing Mom. Having been taught the art of alchemy by Rorona Frixell (the protagonist of the previous game), Totori slowly develops her skills as an alchemist to aid others and her own journey, with the goal of becoming a famous adventurer firm in her mind.

As a direct sequel to Atelier Rorona, the game plays very similarly with some noticeable improvements to the interface, balance and general design. It also possesses a somewhat more adventurous story than is typical for a main series Atelier game, with a clear and serious goal from the start and several climactic, plot-central battles.

A Playstation Vita Updated Re-release titled "Atelier Totori Plus" was released in Japan in November 2012, and American/European territories in March 2013 over the PlayStation Network. It made headlines when the Australian Classification Board classified it

as R18+* Restricted to 18 or older; this rating was introduced in January 2013 as a compromise to simply banning games outright. for "High Impact Violence" and "References to sexual violence", despite the fact that the original version of the game was rated as a relatively innocent PG. (In contrast, the ESRB rated Totori Plus as T, and PEGI gave it a "12".) Another rerelease, Atelier Totori DX, was released on September 20, 2018 in Japan and December 4, 2018 in North America as part of the Atelier Arland Series Deluxe Pack for PlayStation 4, Nintendo Switch, and Steam.