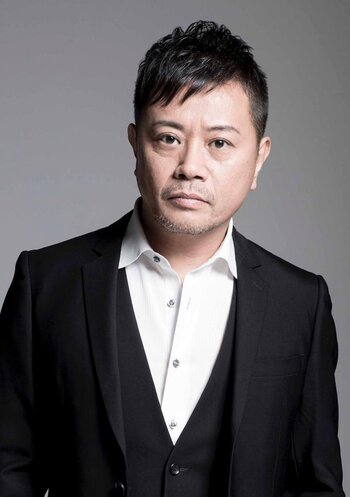 KHUUUUUUUUU!!! My voice roles are all so cool!
Advertisement:

Mitsuo Iwata (born July 31, 1967) is a seiyuu; who was born in Tokorozawa, Saitama. He is married to fellow seiyū Rikako Aikawa.

Normally, he is often typecast as The Hammy Plucky Comic Relief, and people would most likely remember him as the lovable super robot, Mic Sounders the 13th (as well as Stallion White) of GaoGaiGar, Itsuki Takeuchi of Initial D, and lastly, for the older fanbase, Kaneda of AKIRA. Many sites praise him for being a badass and hardworking seiyuu.

IWATAAAAAAAAAAAA!!!
That's Mister Iwata to you, you bastard!
Beep!