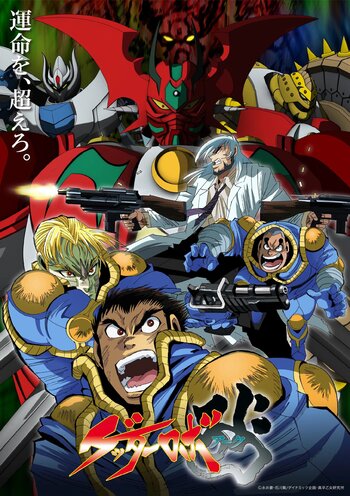 The genes of combat have been passed through the ages! Lay down your lives and fight for the helpless!
Advertisement:

The new Getter Team is comprised of:

As the struggle against Andromeda continues, it becomes clear that there's even more at stake than anyone realizes, especially once the true nature of the Getter Emperor is revealed.

Arc was originally intended to be the Grand Finale to the Getter Robo saga. However, between the collapse of Super Robot Magazine and the death of Ken Ishikawa in 2006, the manga abruptly ground to a halt. Many thought that Arc wouldn't receive much more attention…

…until July of 2021, when an Animated Adaptation by Bee Media and Studio A-Cat was released. The Arc anime is notable in that compared to other Getter Robo adaptations, it's very faithful to the manga, both in plot and in aesthetics. However, this didn't stop it from having a little bit of Adaptation Expansion, as well as an all-new ending.