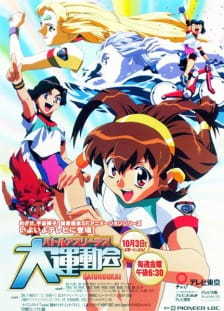 Battle Athletes is a Bishoujo / sports franchise consisting of three video-games, a manga series, and two anime series produced by AIC in 1997.

The first game was released for the Sega Saturn system at the end of 1996. Two more games were released later: "Alternative", also for the Saturn, was released in 1998. "GTO", for the PlayStation, was released the following year. The manga, penned by Yūki Nakano, was published from March 1997 to November 1998, with a total of 4 volumes.

The anime series consist of a 6-episodes OVA and a 26-episodes TV series. The OVAs were released from May 1997 to June 1998, while the TV series aired from October 1997 to March 1998. Both series were originally subtitled Daiundokai ("Great Athletic Meeting"), but upon receiving a North American release by Pioneer, they received different Western titles: Battle Athletes (the original OVAs) and Battle Athletes Victory (the TV series).

Through all different media, the series star Cute Clumsy Girl Akari Kanzaki, the daughter of the legendary athlete Tomoe Mido, as she strives to join the University Satellite sports competition, where she and dozens of others will compete in a variety of futuristic sports, to see who is Earth's greatest female athlete and champion — the "Cosmo Beauty".

2020 saw the franchise return under the title Battle Athletes Victory ReSTART!, with both a new manga and a new anime. The manga, with the full title Pale Blue Dot: Battle Athletes Daiundokai ReSTART!, began serialization in July 2020. The new anime television series by Seven premiered on April 10, 2021, with Funimation having licensed the series.

Discotek Media has also rescued the original OVA and TV series and is now available for purchase on SD Blu-ray.

The original series provides examples of the following tropes: