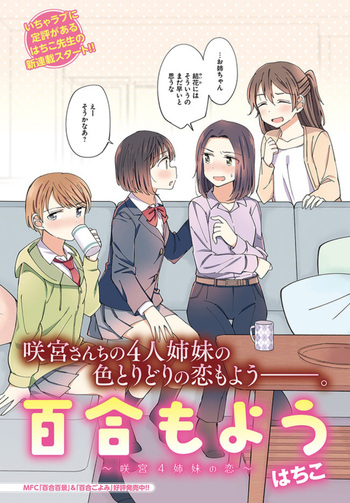 The Japanese cover of Yuri Moyou.note From left to right: Mizuki, Yuika, Serina, and Ryou
Advertisement:

The Sakimiya sisters, comprising of Ryou, Serina, Yuika, and Mizuki, all run their own lives separately, which also includes their respective romances.

Ryou Sakimiya has a Teacher/Student Romance towards Hikari, one of her students. Serina Sakimiya, an Office Lady, has an initial Unrequited Love towards Sakuraba, her superior. Yuika Sakimiya, a student, is in a Childhood Friend Romance with Miu, her childhood friend. Mizuki Sakimiya is in a relationship with Tachibana, her senpai.

Yuri Moyou is a Yuri Genre manga written by Hachiko, which was serialised by Comic Cune on July 27, 2018 up until December 26, 2019. The manga finished with two volumes and 42 chapters total.