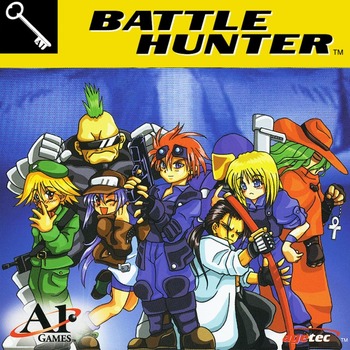 Battle Hunter (known as The Hunter: A.R. 0062 in Europe) is a PlayStation game by Success in the vein of a Roguelike or Tabletop Game. The players are assigned to create their own Hunter from an albeit limited character creator. During gameplay, four Hunters (with AI taking empty slots) are sent to find a Key Relic in a randomly-generated dungeon by searching through crates and fighting off the occasional Random Encounter. Whoever gets the best score wins, although there isn't much of a point to winning unless you're playing with friends.

There's a simple card system that affects speed (blue), attack (red), defense or evasion (yellow), and traps (green). Everyone can see each Hunter's hand, and there are 100 cards in the initial deck. When that deck reaches zero, the GON appears. Usually, this is a Hopeless Boss Fight but with an Exit card the person holding the Key Relic can teleport out and end the game.