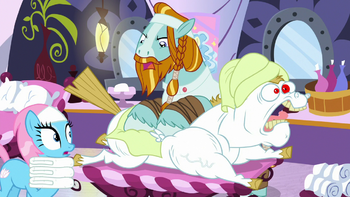 Getting a massage is supposed to be a positive experience. It can relieve stress, relax your muscles, and even fix chronic pain. However, there's a tendency in fiction for massages to be anything but relaxing; they're agonizing experiences, as the character on the table just gets beaten, pounded, and generally abused while they can do nothing but groan and take it.

Their massage therapist will often be a Battleaxe Nurse or Brawn Hilda, but this sort of massage can come just as easily from not-as-strong amateurs. In fact, sometimes it's a character's friend genuinely trying to give them a good experience- the hilarity in this case comes partially from the fact that a character is inadvertently causing their friends pain without realizing it. Another common scenario is for two characters to get a massage, with the duo's Butt-Monkey winding up in this situation to contrast the luckier character's relaxing time.

This can be Truth in Television, as certain types of massages can be painful; however, in fiction, the agony is exaggerated, and the benefit minimized, all for comedic effect.

Compare Harmful Healing and If It Tastes Bad, It Must Be Good for You. Contrast with Massage of Love, which is the tender and pleasing version and Happy Ending Massage, where the massage is not only pleasant, but sexual.

The Whammy massages the stack of money so hard, it explodes into dollar bills.

The Whammy massages the stack of money so hard, it explodes into dollar bills.