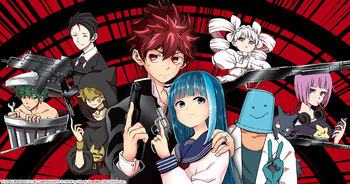 Taiyo Asano is shyer than most. In fact, he's so shy that he'll pass out every time someone tries to talk to him. The only person he can confide in is his Childhood Friend, Mutsumi Yozakura. Unfortunately for him, their friendship becomes complicated when their teacher threatens to kill him for being so close to her.

After being swiftly rescued (or kidnapped, depending on how you look at it), he discovers that Mutsumi is the heir to a family of international super spies and that his would-be murderer is Mutsumi's Knight Templar Big Brother. The only way to make it out of this alive is to marry Mutsumi, and so the skittish Taiyo is dragged into a murky world of espionage to protect the girl he loves.