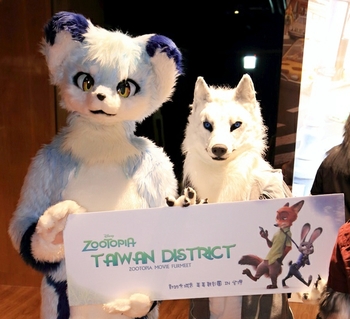 If you bring Funny Animals, they will come.
Some works tend to unintentionally appeal to Furry Fandom members. A large number of fiction starring animals attract some sort of furry audience (in fact, some more obscure works are only remembered now due to furries and the internet), however some especially provoke this.
Advertisement:

Contrary to what some would say, this is rarely due to Perverse Sexual Lust; many people who are fond of a specific type of animal (dogs, foxes, turtles, etc.) are often drawn to characters of that type. That being said, the aforementioned lust is undoubtedly there otherwise, to the point that some furries — especially NSFW / Rule 34 artists and writers — will often indulge in heaps of Self-Fanservice over these types of characters.note Expect characters who don't look plain or not that alluring in their source material to be turned into Mr. and Ms. Fanservice.

Most furries got into the fandom through some sort of fiction, typically through ones set in a World of Funny Animals. Beast Man, Funny Animal and Talking Animal characters are most common in children's media, so many furries were drawn in from cartoons, video games, literature, or animated movies.

There are generally two types of furries: "feral" fans who like xenofiction, Nearly Normal Animals, Partially Civilized Animals, et cetera, and the more well-known "anthro" fans who like Funny Animals. The two do intersect, but it's more common for the two not to due to differences in interest; they're attracted to different series. This is a part of the reason you rarely see people make The Lion King characters into Funny Animals or make Sonic the Hedgehog characters into "normal" animals. There are even some furries who are attracted to a character or creature that don't resemble any animal in particular as long as they look "bestial" enough, such as demons, gargoyles, and even orcs.

Japan has its own furry fandom where the characters are called "kemono" (meaning "beast"). Basically, the designs tend to be rounder and softer looking than other furry characters, and the ones appealing to the bara fans even have a more "stocky" look to them more often than not. Kemono characters are often popular internationally and, obviously, kemono fans are drawn to certain series as well.

The following works have developed a fanbase within the Furry Fandom: