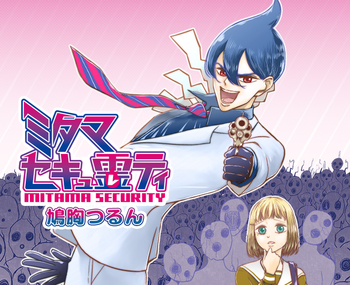 That's a lot of spirits, jan k'now?
"I won't lie. I'm afraid of spirits. But as long as evil spirits exist, I'll face my fears as many times as it takes. Because that it my duty as a SecuREIty professional!"
— Joh Mitama, right before being possessed by a spirit he didn't notice
Advertisement:

Rena Haze is an ordinary teenage girl except for a simple detail: not only does she possess the rare ability to see spirits, but she is also haunted by a good hundred of them simultaneously. She learned to not pay attention to them and lives a simple life though she often feels lonely, having no one to share that burden with and her mother often leaving her alone due to her job.

Enters Joh Mitama, an exorcist from the SecuREIty Associationnote "rei" (霊) meaning "ghost" or "spirits" who made the oath to protect Rena Haze from the ridiculous amount of spirits following her despite being himself absolutely terrified of ghosts. However, they will soon both realize that her spirits aren't actually very dangerous at all. In fact, they are quite friendly and even start to bond with Rena Haze as she finally acknowledge them because of Mitama's antics. Despite this unexpected turn of event, Mitama doesn't let his guard down and continues to keep an eye on Rena Haze as her unusual connection to spirits begins to attract powerful entities and sketchy exorcists.

Don't let that summary fool you: Mitama Security: Spirit Busters (ミタマセキュ霊ティ) is absolutely not a battle manga nor a Horror story, but a lighthearted Slice of Life Gag Series, most chapters being about our two protagonists meeting and reacting to a cast of colorful characters gravitating around Rena Haze including a muscled spirit with ten feet for a face, a Mon catching Yakuza, a talking salmon, and Babe Ruth.

Mitama Security is written and illustrated by Tsurun Hatomune (who previously did the equally absurd Mukidashi no Hakuchou a.k.a. Naked Swan on Shōnen Jump+). It was first published in Weekly Shonen Jump in September of 2019 (alongside Mission: Yozakura Family) and concluded after a year of serialization and compiled into 5 volumes.

See also Mieruko-chan, another spirit-filled manga with a similar concept but with an actually scary spin on it.

Mitama Security is haunted by examples of: