Leaning on the Fourth Wall 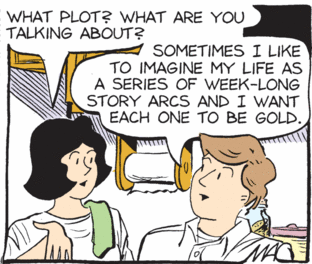 Vernon Dursley: I am not aware that it is any of your business what goes on in my house—
Mad-Eye Moody: I expect what you're not aware of would fill several books, Dursley.
— Harry Potter and the Order of the Phoenix
Advertisement:

Bob: Hey, Alice, have you ever noticed how sometimes a character will talk to another character about something that sounds like it's really about the show they're in, but it makes perfect sense in context?

Alice: Yeah! Usually it sounds strained because it's hard to make this kind of dialogue sound completely natural.

Bob: But if they can pull it off, it's usually good for a bit of comedy.

Alice: This might be related to Lampshade Hanging, This Is the Part Where..., Conversational Troping or any other trope with Fourth Wall in its name.

Bob: You mean like Fourth Wall Psych? What about Aside Glance? The inverse would be This Is Reality. Common subtropes are Diegetic Soundtrack Usage and Who Would Want to Watch Us?... wait, why are we talking like this?