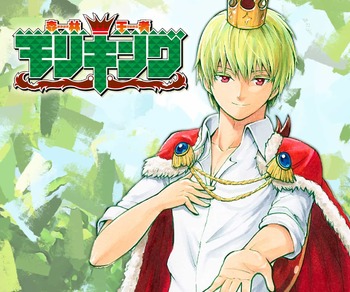 He's going to become King of the Forest!
Advertisement:

Shota Aikawa is stoked when his father buys him a rhinoceros beetle larva as a pet for him to raise. Although Shota's sister Shoko is disgusted by the grub, she brushes it off as one of his schoolboy things and tells him not to come crying to her if anything bad happens. But on the day the grub, now named Moriking, is supposed to emerge from its pupa to become an adult beetle, something... strange happens.

Instead of being a three-inch beetle, Morking emerges as an incredibly muscular Bishōnen. They soon learn that Moriking is one of five candidates to become King of the Forest and ruler of all insectkind. Grateful to the Aikawas for saving his life by buying him from the pet store and raising him, Moriking swears eternal loyalty to his adoptive family while vowing to become king to bring about an ideal world. And so begins the Aikawa's adventures with their pet rhinoceros beetle and the bug-filled world they've stumbled into... and Shoko seems to be the only one who has a problem with any of this.

Moriking is a comedy Shōnen manga written by Tomohiro Hasegawa that ran in Shonen Jump from April 2020 to January 2021.