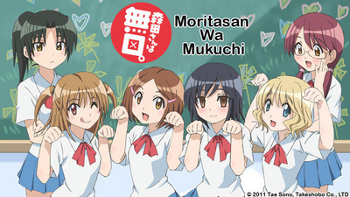 Morita-san Wa Mukuchi ("Morita-san Is Quiet") is a Japanese four-panel comic strip manga written and illustrated by Tae Sano. It's about Mayu Morita, a high school girl who is extremely reticent. Her silence and habit of looking at people's eyes straightly sometimes cause misunderstandings. The reason behind it is not because she doesn’t like to talk nor because she has nothing to say. The reason she rarely speaks is due to the fact she thinks too much before speaking, thus losing the timing to speak altogether. She lives a happy school life with her classmates.

The manga was originally published in the March 2007 issue of Takeshobo's Manga Life magazine, and later moved to Takeshobo's Manga Life Momo and Manga Club magazines. The first tankobon volume was released in January 2009; as of February 2011, three volume have been published. An Original Video Animation was bundled with volume three of the manga in February 2011, and another OVA was released separately in March 2011. A TV anime series produced by Studio Gram (the same as the OVAs) began airing in Japan in July 2011. The first season ended in September 2011, but the second season immediately started in October 2011.