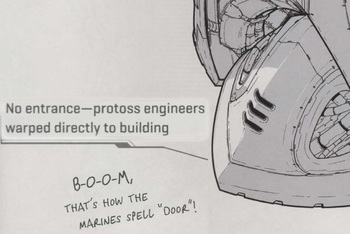 If you're resorting to Bullethole Doors, it's safe to say you weren't meant to enter in the first place.
Advertisement:

To use any sort of structure, every being on Earth needs it to have an entrance, and so do most things in fictionland — whether they be rabbit holes, anthills, dragon caves, skyscrapers, a space station, or just about any other structure, all have entrances to facilitate their use.

Therefore running into a structure clearly intended to be used, but without any sort of entrance, is a bit of a lurch, and immediately gets across that whatever this structure is, it was not usable for the average corporeal muggle: Maybe whatever uses the structure has Intangibility powers; maybe they use Teleportation to teleport directly inside, maybe the builder Failed a Spot Check when going over the design documents, or maybe the structure once saw use, but was sealed up so thoroughly that it doesn't even register that it used to have an actual entrance - in which case, you've probably found the one of the many types of can and should think twice about proceeding without knowing which one.

A common subversion is for the structure to have no apparent entrance until The Chosen One, or someone with the right McGuffin approaches, whereupon the structure reveals itself to be a case of Only the Worthy May Pass as an entrance becomes apparent, probably leading to a Secret Room; this subversion is common because it turns the act of entering from an impossibility if you don't possess alternate means of entering, to 'merely' a puzzle for the characters to unlock. In this case, someone who does possess an alternate means of entering, for instance teleportation, is likely able to perform a Dungeon Bypass. Though, unluckily for the heroes, these characters tend to be villains, giving them a head start on whatever the structure contains.

Attempting to create a Sealed Room in the Middle of Nowhere, a Super-Trope, counts as this only if there is no entrance left after the sealing - merely locking the only way out isn't enough - neither is having a surface with visible locks but no visible entrance, as the existence of a lock means that it, by necessity, must open something. Outside these subversions, Anti-Structure or Barrier-Busting Blow is generally going to be the only way to actually access the building for those lacking the otherwise intended means of ingress, though More Dakka can prove a viable solution by way of Bullethole Door, and this is one case where blowing open a hole in the wall is generally seen as justified, averting There Was a Door entirely.

Not to be confused with Gateless Ghetto (urban areas with no entrance in video games).