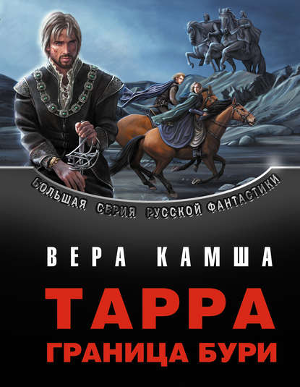 René (front), Roman, Gerika (mounted), and the Riders of Gorda (background) note on the cover of Tarra: Edge of the Storm, the 2009 Updated Re-release of the original duology
Advertisement:

The Arcia Chronicles (Хроники Арции) is a High Fantasy novel series by Russian author Vera Kamsha, set in a Constructed World of Tarra, which itself is a part of a multiverse. What makes Tarra stand out among other worlds is that unlike them, it doesn't have any gods: some nine thousand years ago, seven alien deities known as the "Lightbringers" conquered Tarra, slaughtered the native Old Gods and whatever worshipers they had, and ruled Tarra for seven thousand years in the name of the "Light". After that, the "Light" called them back, leaving Tarra effectively defenseless against cosmic threats. Therefore, it is up to local humans and a handful of Elves (left behind by two renegade Lightbringers) to punch out cosmic monstrosities eying Tarra. The books are mostly set in Arcia (hence the title), a Vestigial Empire (later, a much smaller kingdom) in what is likely the most densely populated region of the world.

The first book in the series, The Dark Star, is set two and a half millenia after the Great Exodus and opens with two men, a Wandering Minstrel named Roman and Duke René Arroy of Eland, a notorious explorer and pirate, stumbling across a string of mysterious brutal murders in Arcia's south-eastern neighbor, the Kingdom of Tayana. Following the evidence, they soon clash with the cultists of Roigu, the last surviving Old God, who aim to incarnate their eldritch patron as the child of the meek princess Gerika Godoya, who happens to be René's distant relative. Fortunately, Roman is not a simple bard but, in fact, an undercover Elven spy among humans, while Lucky René is a descendant of both Elves and the Old Gods, making him uniquely suited to withstand dark magics. Together, they take up arms against the Roigians to protect Gerika, the future "Dark Star", but in doing so, also kick off the devastating War of the Deer (named after Roigu's totem form)...

The Dark Starnote then titled Izbrannitsa Preispodney, meaning "The [female] Chosen One/Love Interest of Hell/Abyss", which was presumably deemed too kitschy — not to mention lore-breaking, since there is no concept of "hell" in Tarra started off as a Deconstruction Fic of the High Fantasy genre and, in particular, of Nick Perumov's Chronicles Of Hjorvard, but eventually lost all connections to the source material (with only slight conceptual overlaps, such as the "True Mages"), and when Perumov himself discovered the manuscript, he took it straight to his publisher. A total of six books had been published between 2001 and 2003, before Kamsha switched her attention to her second series, Gleams of Aeterna, for what turned out to be the next two decades. The official line since has been that Arcia will be completed after Aeterna, but unfortunately, it looks increasingly like it will never happen, due to a combination of the author's interests and style evolving in completely different directions and the zeitgeist changing too much in the intervening decade for the plot she had originally drafted (at least, according to the Word of God, although her comments from early 2018

suggest that she hasn't fully abandoned hope of one day giving the series a proper closure).