"I was just thinking about the life of a pumpkin. Growing under the sun, happily entwined with others. Then someone comes along, cuts you open and rips your guts out."
—Buffy Summers 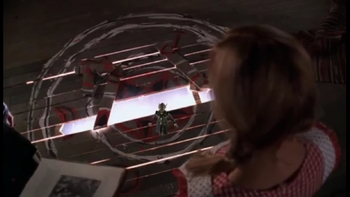 While carving jack o' lanterns in Xander's basement, the gang discusses their plans for Halloween, while Buffy continues to mope over her situation with Parker. They decide to go to the Alpha Delta house for a Halloween party. Buffy leaves early; on her way home, a kid jumps out at her wearing a demon mask, and she hits him without thinking. He asks her what is bugging her (but in a mean tone), and then takes off, not getting to hear Buffy's reply of "That's what I'd like to know".

The next day at school, Buffy and Oz both express their concerns for Willow about her magic. Buffy spots Parker and immediately runs away because she doesn't want to face him. Willow follows and tells her to get over it and have fun at the party that night, but Buffy thinks that Giles will want her to do some patrolling. However, when Buffy goes to visit Giles, he's wearing a sombrero and is in an incredibly cheerful Halloween mood, much to her surprise. Reminding her that demons are generally quiescent on Halloween, he encourages her to go to the party.

At the fraternity house, the boys are getting ready for the party. One of them finds a symbol in an old book to paint on the floor of the party room. Anya goes to see Xander, and again wants to know where their relationship is heading.

He agrees that they're somewhat dating and invites her to the Halloween party that night, telling her to dress in something scary. Buffy visits Professor Walsh and asks for her missed assignments, but is met with less than kind reception from the strict teacher. Riley however, gives her the assignment and then tells her to have fun on Halloween. Oz and Xander carry the equipment for a sound system to the fraternity house and Oz installs it while some of the guys paint the symbol on the ground. Oz cuts his hand and some of his blood spills onto the symbol making it pulse with energy — and turning a fake spider lying on it into a real one.

Joyce sews one of Buffy's old Halloween costumes, Little Red Riding Hood. They talk about how things used to be with her dad around and her mom's current social life. Buffy waits outside the party for her friends, and Xander shows up dressed as James Bond. They run into Willow, who's dressed as Joan of Arc, and Oz, who's going as God (his costume consists of a "Hello, My Name Is" sticker with the word "GOD" written on it).

At the party, a guy leads a blindfolded girl to stick her hand into a bowl of grapes and tells her the grapes inside are eyeballs. When she takes the blindfold off, they really are eyeballs. Everything at the party goes crazy as people run in all directions screaming, some ending up mutilated and injured in various ways. The gang starts to make their way through the maze, but they encounter several Halloween obstacles, including fake cobwebs and skeletons that jump out at them. They really start to get scared as a spider crawls on Willow, they discover real blood on the floor and bats fly down from the ceiling.

Anya arrives at the party, dressed as a big pink and white bunny, but she is unable to get in as the front door has disappeared. As she walks around to the front, she sees a girl screaming at a window, and the window disappears from the house. Inside, and unable to get out of the house, Buffy tells the gang to find a way out and to get help. They find Chaz, one of the fraternity members, in a closet saying that "it's alive." A skeleton attacks Buffy from behind with a knife, but she destroys it and it becomes fake again. Buffy and Willow fight over Buffy giving orders and then over whether Willow can safely do a guidance spell to lead the way. Anya goes to Giles for help.

Xander tries to talk to Buffy and the gang, but he finds that he's invisible to them all as they completely ignore him. Willow and Oz, who go off on their own to find a way out, find a set of stairs, and head up. As they're walking, Oz starts to change into a werewolf and scratches Willow before running away from her. Xander approaches a mirror, and along with his reflection a once-fake head on the table behind him says that he can see him too. Oz sits in a bathtub, chanting over and over that he isn't going to change. Willow conjures her spell to Aradia, the goddess of the lost. The spell, however, gets out of control and she screams for help as it attacks her. Buffy, hearing Willow's cries tries to get to her, but instead falls into the basement where the dead start coming up from the ground and grabbing at her. A dead man tells Buffy that she will keep fighting but always end up in the same place.

Meanwhile, Giles and Anya are unable to find a way in, so Giles pulls out a chain saw and cuts a door into the house. In their frenzied attempts to escape their fears that have somehow come true, all the gang runs into the coat room and things seem back to normal. From the book the frat boy used, they determine that the sign on the floor is the Mark of Gachnar. Giles and Anya then break into the room. Buffy destroys the symbol before Giles can tell her that destroying the symbol will bring Gachnar forth. But as the demon has manifested itself, it turns out he is mere inches in height. After a laugh, Buffy simply squashes him with her shoe. At Giles' place, they eat candy and Giles discovers his mistake. The small picture of Gachnar in the book had a Gaelic inscription reading, "Actual size."