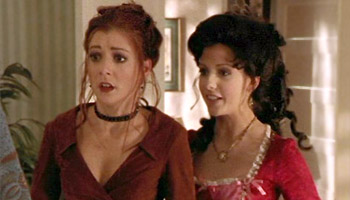 Spike: Tomorrow's Halloween. Nothing happens on Halloween.
Drusilla: Someone's come to change it all. Someone new.
Advertisement:

It's Halloween, and Principal Snyder forces Buffy and her friends into chaperoning small children while they trick-or-treat. The Scoobies head off to a newly opened costume shop. Keen to impress Angel, Buffy picks out a beautiful 18th century style gown. The shop owner, Ethan, compliments her taste and offers her a deal. Willow decides to go for the "sheet over the head" ghost outfit, and Xander buys a toy gun to go with his army fatigues from home.

Later that night, Ethan seems much less innocuous as he chants to an evil-looking statue in the back of his shop. At the same time, Drusilla feels that something has changed in the air. She informs Spike that that the time is ripe to attack the Slayer. Ethan's spell takes effect, and everyone wearing a costume from his store turns into the respective persona. Willow becomes a literal ghost, able to walk through walls, Xander a trigger-happy soldier, and Buffy a hapless 18th-century noblewoman.

Willow rushes them to Buffy's house, where they find that Cordelia has not been affected by what she's wearing—a cat costume—because she bought her costume from a different, high-end store. Willow alerts Giles to what's going on, and it becomes clear that the problem arose at the costume shop. They head to back to Ethan's, where it's revealed that Giles and Ethan know each other. He orders Willow to leave and then interrogates Ethan to learn how to reverse the spell.

The Scoobies, led by Angel and Xander, manage to take refuge in an empty warehouse; however, they're quickly tracked down by Spike and his minions, who are hot on their heels. Just as Spike is about to kill Buffy, Ethan breaks and reveals that the spell is emanating from the statue, which Giles hurls to the floor. Buffy reverts to her old self, and with his minions reverted back to children Spike beats a hasty retreat. The next day, Giles heads back down to the costume shop to confront Ethan, but the shop has been cleared. He'll be back...