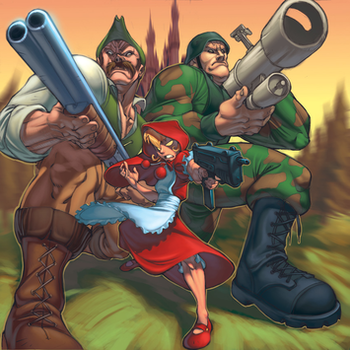 My, Mr. Wolf, what gruesome bullet wounds you have!
"When the little girl opened the door of her grandmother's house she saw that there was somebody in bed with a nightcap and nightgown on. She had approached no nearer than twenty-five feet from the bed when she saw that it was not her grandmother but the wolf, for even in a nightcap a wolf does not look any more like your grandmother than the Metro-Goldwyn lion looks like Calvin Coolidge. So the little girl took an automatic out of her basket and shot the wolf dead."
Advertisement:
(Moral: It is not so easy to fool little girls nowadays as it used to be.)
— "The Little Girl and the Wolf"

In her commonly known fairy tale incarnations, Little Red Riding Hood was a naive, helpless little girl who was at the mercy of a vicious predator. The story has become so ingrained into Western culture that any time we see a little girl dressed in a red hooded coat on television, it is reasonable to expect that something terrible is going to happen to her.

However, given the popularity of the Fractured Fairy Tale, it was inevitable that this story would recieve modern updates. Modern versions of "Little Red Riding Hood" tend to have a feminist vibe, making her tough, streetwise, and able to take care of herself, thank you very much. This updated version will almost always be named "Red."

A popular, Grimmified variant is to give her a gun, an axe or some other weapon and have her hunt down the "wolf" (Who may or may not be a literal wolf) herself. This variant will feature a teenage or adult Red, who will naturally be Hotter and Sexier, making her double as a Lady in Red. If she says "What big eyes you have" it will be a Pre-Mortem One-Liner right before putting one right between said eyes.

A more subtle version simply has a young woman entering a dangerous situation dressed in a red jacket, seemingly to invoke Little Dead Riding Hood, only to then subvert it by revealing her toughness.

Note that, despite the title, Red does not have to be an Action Girl to qualify as this trope. Any "updated" version of the character who is shown to be capable of taking care of herself is valid.

The Trope Codifier is James Thurber's "The Little Girl and the Wolf" (1939), in which the titular character blows the wolf away with an automatic gun she carries in her basket. Contrary to what modern audiences might think, Thurber's parody is not necessarily also the Trope Maker: among the many traditional folktales of the Red Riding Hood family, there are many in which the heroine escapes from danger by her own wits, and some in which the villain dies. Indeed a look into the original Brothers Grimm book reveals that the familiar tale in which Red Riding Hood gets saved by a huntsman is directly extended with an alternate variant in which Red Riding Hood runs into yet another wolf; wisened up by her previous experiences, she outsmarts the wolf and with a ploy devised by granny, drowns him in a trough of water.