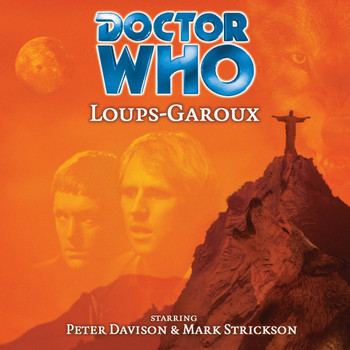 The Fifth Doctor and Turlough visit Brazil in 2080, decades after the Amazon has turned to desert. But not everyone in Rio is dying a slow, lingering death brought about by environmental and economic collapse. Impossibly wealthy werewolf Ileana de Santos and her invalid son are taking a luxurious private train towards their family's private compound.

The Doctor wants to find out more about what's going on, especially once he and Turlough start being stalked by the father of all werewolves, Pieter Stubbe. Ileana, looking for a protector, latches on to the Doctor and confides in him.

The wolf band quickly realises that Turlough and the Doctor aren't human, and toy with them for a bit, ignoring Ileana's pleas. Turlough is driven mad and escapes into the forest, where he meets Rosa, a teenaged native American shaman who's the last of her tribe. She carries the spiritual remains of the entire forest (trees, animals and humans) in her mind. It's driving her a bit mad, but she's willing to bear it if it means she can kill Stubbe once and for all.

When the Doctor decides to be Ileana's new protector, it leads to an Accidental Proposal and a whole lot of angry werewolves. Fortunately, Turlough is carrying Rosa's silver blade when Stubbe swallows him whole, so he's spat back out again (although just slightly traumatised). Eventually, the Doctor saves the day by simply getting Stubbe inside the TARDIS and hovering far above the Earth for a bit. Since werewolves can't live without a connection to the soil, Stubbe is made to realise that he doesn't stand a chance, and that he's an old world artifact with no place in current human society. Instead of killing Stubbe, Rosa guides his spirit into her mind and tells him to enter her spiritual forest, as long as he doesn't stray from the path.

With Ileana's son safe, she hopes the Doctor will stay with her as her husband — but she can't leave the Earth, and he's not at all inclined to settle down (and just a bit embarrassed by the whole ordeal).