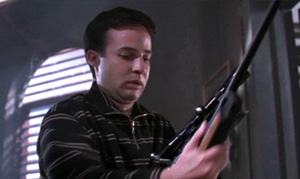 "My life happens on occasion to suck beyond the telling of it. Sometimes more than I can handle. And it’s not just mine. Every single person down there is ignoring your pain because they’re too busy with their own. The beautiful ones. The popular ones. The guys that pick on you. Everyone. If you could hear what they were feeling. The loneliness. The confusion. It looks quiet down there. It’s not. It’s deafening."
—Buffy Summers
Advertisement:

No graveyard this time. As a change of pace, we open on a playground. Our heroine fights with two ugly, mouthless, Creature-from-the-Black-Lagoon-esque demons. She manages to kill one while the other one hightails it out of there. Zoom-in on Buffy's left hand: some glowing goo seeps into her skin. Her hand starts to itch throughout the next day.

Buffy goes to Giles to get some itch-counseling. He picks a demon mug shot out some old book, and Buffy confirms it's the one. Giles says that touching these demons can cause one to be infected with an Aspect of the Demon.

During lunch, Xander jealously eyes Cordy as she wanders off, and wonders to himself if she's been making out with Wesley. Buffy empathizes with Xander, thinking that he's just spoken his thoughts aloud. "You read my mind," exclaims Xander. Buffy looks contemplative. She heads down the hallway distractedly and proceeds to zero in on everyone's inner thoughts. She goes to Giles, who is agape—but makes the logical leap that the demons didn't need mouths because they communicate telepathically. Buffy is excited to start playing with her new power. Giles suggests that she could anticipate her opponents' moves.

Advertisement:
"Oh, way better than that!"

Cut to English class. Buffy cribs the answers from other students' minds, impressing the teacher. On the downside, Buffy also detects Willow's surprise that she actually read and understood a book, Xander's lusty thoughts of the teacher, and Freddy Iverson's (the editorial writer) disdain for all other living beings.

Next stop: Angel estates. Buffy uses her newfound power on Angel, talking about Faith and trying to provoke some thoughts from him. Angel gets wise to her act and tells her mind-reading doesn't work on vampires. He also warns her that this mind-reading thing can have its drawbacks.

Ruefully, Buffy returns to school, barraged by everyone's painful thoughts. In the cafeteria, the din grows louder until one thought comes through clearly:

"This time tomorrow, I'll kill you all."
Advertisement:

Buffy runs around frantically, trying to figure out who said it, but she can't separate one thought from another. She freaks out, covers her ears, and faints. She comes to under a tree with the gang peering down at her. Buffy tries to barge back into the school, only to be driven backward as she is overwhelmed by random thoughts. Giles offers to take her home while the Scoobies investigate everyone who was in the cafeteria.

Giles and Wesley figure out how to cure Buffy, but they need the heart of the demon that got away. And lo and behold, Angel is out fighting said demon. Hours later, there's frantic knocking downstairs, and Wes opens the front door to admit Angel, under a smoking blanket. Angel holds up a glass flask containing a blue, glowing concoction. Angel supports Buffy's head and tips some of the blue liquid into her mouth. The medicine is worse than the sickness, but in time Buffy reawakens.

Dramatic music tingles as we see Jonathan up in the Clock Tower...with a rifle.

The gang compares notes, and learn that the only person they've been unable to find is Freddy Iverson. They finally corner him in his office, only to discover that he's been ditching Oz because of a bad review he wrote of Dingoes Ate My Baby. Buffy arrives, telepathy-free. Cordelia finds a letter to the editor from Jonathan, which says: "By this time tomorrow, you will all know what I have done."

The Scoobies split up to find him, while he prepares his gun in the clock tower. Ever-reliable Xander races into the cafeteria, but is distracted by some prepared bowls of America's favorite dessert, green Jell-O. In the quad, Buffy spots Jonathan and uses some impressive moves to reach the tower, bursting in to find Jonathan pointing the gun at her. Buffy talks Jonathan down by explaining that the reason no one pays attention to him is because they're concerned with their own anxieties. A pacified Jonathan hands her the gun, saying he came up there to kill himself.

Back in the cafeteria, Xander is about to scarf down some Jell-O when he catches sight of the lunch lady tipping a huge, cartoonish box labeled "RAT POISON" into the food. The maniac comes at him with a butcher knife, and is about to cleave Xander a new one when Buffy swoops in and disarms her.

Time for the recap. Jonathan is suspended, in therapy and less popular than ever due to his rifle-happy ways. Giles inquires if Buffy is ready to train. She agrees to work out after school, and then adds, "You know, if you're not too busy having sex with my mother!"