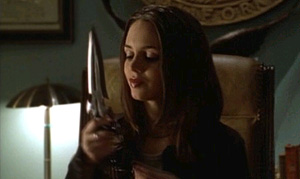 "Actually this isn't about you, although I'm fond don't get me wrong of you. The other night, you know being captured and all, facing off with Faith, things just kind of got clear. I mean you've been fighting evil here for three.. years, and I've helped some, and now we're supposed to decide what we want to do with our lives and I just realized that's what I wanna do, fight evil, help people. I think it's worth doing and I don't think you do it 'cause you have to. It's a good fight, Buffy, and I want in!"
—Willow Rosenberg
Advertisement:

The episode starts out with the Mayor giving Faith a gift—as an early reward for going to the airport and picking up a package for him. The present: a big, expensive, mean-looking knife. Faith looks pleased with her new toy.

SHS. Buffy resignedly says it looks like she's attending UC Sunnydale, but she's excited for Willow, who got into Oxford (as well as Yale, MIT, Harvard...). Xander, who is reading On the Road, is resigned to joining the ranks of the unemployed. Cordelia wanders by to throw some insults their way, while neglecting to mention where she's going to school. Plot point.

Buffy, who saw Faith take a box into City Hall, attacks her henchvamp and demands to know what's in it.

Buffy tells the gang about the package—an item integral to the Mayor's upcoming Ascension—and they develop a plan to get it. Wesley doesn't like how fast things are moving, and points out that the Mayor will have supernatural powers protecting the box. Looks like a job for Wiccan girl. Later that night, Oz and Xander remain behind at the library, following Willow's directions for preparing the spell which will destroy the box. On the roof of City Hall, Willow pours a powdery substance through the skylight onto the box, breaking the supernatural barrier around it. Following a bit of a snafu with Buffy's winch harness, Buffy claims the box and escapes on foot while the confused guards chase after Giles' speeding van.

A bit later, the Mayor is scolding the guards. Faith puts a smile on his face when she enters holding Willow at knifepoint. What would he do without her?

Back at the ranch, the gang debates how to get Willow back. Buffy proposes they simply trade for the box, but Wesley insists the box has to be destroyed. The argument escalates, but Oz is having none of it. He smashes the implements for the box-destroying ritual, leaving them with but one choice.

Willow is trying to escape the room she's locked in when one of the vampire guards comes in, deciding he wants a taste of her. But she uses her telekinesis abilities to kill him with a nearby pencil, and runs out of the room. Willow ends up in the Mayor's office, where she opens up his secret closet and finds the Books of Ascension. Faith catches Willow reading them and threatens to kill her, but rather than be intimidated Willow tells her off, calling her a selfish, worthless, waste. The Mayor interrupts their fight to tell them about a "heckuva" phone call he just finished.

The gang is waiting in the cafeteria where they have arranged for there to be only one way out (or in). The Mayor, Faith, and Willow arrive, along with a couple of henchmen. The Mayor takes the opportunity to deliver a pointed lecture on immortality and the challenges it poses to relationships. Buffy and Angel barely manage to keep their cool. They make the trade, and Principal Snyder comes in with some cops, thinking he's caught them in a drug deal. Oy. Before the Mayor can explain, one of the bumbling cops opens the box, letting out some big bug thing (sort of a cross between a beetle, spider, and crab), which attacks and kills him, then scurries away. Giles tells them not to open the door; they can't let the bug out. Both Slayers cooperate in squishing the critters. Oz asks if that's all of them, and the Mayor says no, there's about fifty billion in the box, and challenges them to try and take it off him now they've got Willow back. As none of them have the Mayor's immortality, the Scoobies don't dare. The Mayor leaves, ordering Faith to come with him. She hesitates as her knife is still embedded in a bug (on a wall behind the Scoobies), but leaves. Buffy pockets the blade for herself. Plot point.

Later, Willow is telling Buffy about her "adventures," but Giles wants to know what she remembers from the Books of Ascension, and she surprises him with a few pages that she stole. Wesley is upset because they're right back where they started.

The next day Buffy tells Willow that she realizes she can't leave Sunnydale. That even if she defeats the mayor, there will be other evils to fight. Willow reveals that she's decided to go to UC Sunnydale, the same school as Buffy. Facing off with Faith made something clear to her — she realized that fighting evil was a good thing. She doesn't believe Buffy does it just because she must, but because it is the right thing to do. And that's what Willow wants to do now. Fight evil, help people, and become a badass Wicca — where better than in Sunnydale? The two go off for mochas.

Cordelia is in the store again, looking at a dress, when another woman comes in and tells her to stop goofing off. That's right. Cordelia is a working stiff now.

That night, Buffy tells Angel about her and Willow going to the same school; she's hoping to live on campus. She tries to reassure him that the Mayor didn't know what he was talking about (he's just a "stupid evil guy") and that they'll be okay. They cuddle up, both looking pensive.