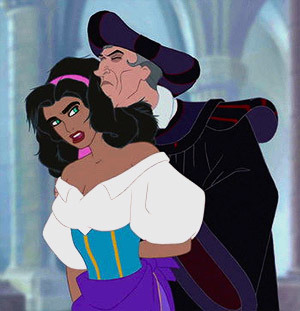 "I was just imagining a rope around that beautiful neck."
Kirito: Look, I don't know how much you paid the old man, but I hope you kept a receipt. Funny enough, Asuna's already married — to me! I-I mean, it was in a video game, so I don't know how legally binding it is, but still, it's the principle of oh god what are you doing?
Sugou: (chuckles sinisterly) She smells like innocence...!
—Sword Art Online Abridged Episode 12
Advertisement:

When a character audibly sniffs another character or something that would carry their scent, indicating they have an unhealthy and often very creepy attraction to them. Usually smelling hair or discarded articles of clothing.

Frollo sniffs Esmeralda's hair at one point after she declares sanctuary.

Frollo sniffs Esmeralda's hair at one point after she declares sanctuary.