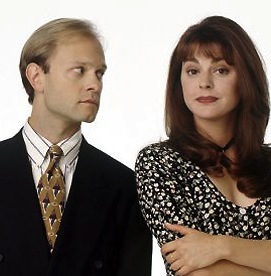 Stare like that for seven years, and she'll eventually turn her head. note Just in time for him to glance the other way.
"Watching through windows,
You're wondering if I'm okay."
— Cyndi Lauper, "Time After Time"
Advertisement:

Bob has feelings for Alice,note Though gender reversals are commonplace and reveals those feelings with a soulful look, tender gesture, or verbal cues that Alice rarely ever notices. There are a lot of possibilities, here are some of the more common ones:

Of course, this may also indicate less than noble love when Bob is a Stalker with a Crush. Usually his expression will be envious or darker, or he might look more intensely than he should. In either case, if caught and Alice (or Charlie) asks why and for how long he's been looking, Bob will either deny the accusation or answer with "I wasn't looking at you, idiot! I was just distracted!" or the like.

The reciprocated version, most likely between Star-Crossed Lovers, is the Held Gaze.

Compare Beautiful Dreamer and Long Last Look, which may overlap with this. Contrast Male Gaze, Female Gaze, and Eating the Eye Candy.