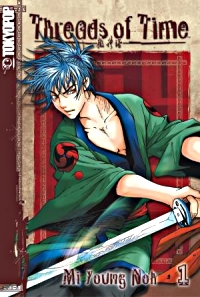 Threads of Time (살례탑) is a manhwa series in the era of Mongol invasions of Korea by Noh Mi-young. It is distributed in English by Tokyopop.

The plot premise is that Ordinary High-School Student Moon-Bin Kim has difficulty sleeping due to a recurring nightmare where he's stranded over a thousand years in the past chasing a dark-haired girl into a deep abyss. Before long, the nightmare overwhelms him, and he is unable to tell whether he is Moon-Bin, a Seoul teenager at the end of the second Millennium, or Sa-Kyung Kim, the son of a prominent warrior family in the middle of the first Millennium. People in his present-day life assume roles in his historical life as he struggles to learn exactly who he is and what he's expected to do, straddling a transmigratory portal through time and space. In the present, his school's kendo club battles to stay in the championships but in the past, Moon-Bin finds himself at the threshold of a territorial dispute on the plains of Mongolia...